The United States of America with Europe

A view to U.S  European Command

Within the NATO and Transatlantic Relations the U.S European Command is working closely with its European partners:

The U.S European Command also provides the largest and most prominent Military Training and Cultural Exchange Center, in partnership with die Bundeswehr, for Training, Updating, Joint Exercise and the Military Maneuvers. Most European Armed-Forces are taking part in these programs. 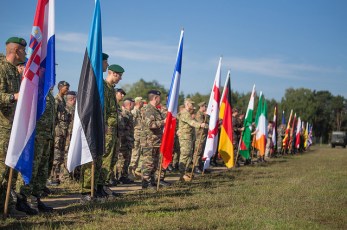 It is important to note that up to present day, the European and especially German Armed Forces are the largest Military stationed in the United States for various Exercises and other Military liaisons exchange programs.

There has been explicitly a great desire announced by the United States to welcome more in U.S, the European Armed-Forces for forming closer partnerships and joint Military programs, which could lead to the crystallization of NATO’s latest strategy on the Smart-Defense and the joint Forces.

The U.S Command in Europe, simultaneously, is engaged in other missions:

Helping people:  helping to build self-sustaining capability in the Eastern Europe and other locations that are recovering from conflicts or war.  And is working at the same time with its European inter-governmental, International as well as NGO partners by providing Humanitarian and Financial assistance to help rebuild stability and prosperity for the conflicts or natural disaster affected Countries.

The latest illustrative projects in the recent years are:

The U.S European Ready Forces were established under NATO frameworks for supporting the Allied. The Unit has the combination of : US Army Europe, US Marine Force Europe, US Naval Forces Europe, US Air-Forces in Europe and the Special Operational Command. It has the Rapid Deployable Unit for the Contingency Operation that works in a coordinated scheme and approach with its European partners.

An Exclusive Interview with the U.S Army Europe

In the Exclusive Interview Series, this time we have the special occasion of presenting our interview with the United States Army Europe. The interview has been conducted with the Team of  Public Affairs of the U.S Army Europe HQ in Germany.

Q:  The United States and Europe are immensely interconnected, not only by Historical Heritage, Values and Ideals for centuries, but also by Political Landscape, Security and Defense.

Our history is absolutely the foundation of what connects the United States and Europe. During the Warsaw Summit in July President Barack Obama said, “In this challenging moment, I want to take this opportunity to state clearly what will never change – and that is the unwavering commitment of the United States to the security and defense of Europe, to our transatlantic relationship, to our commitment to our common defense.”

Continue to read the interview

The Sea Breeze 2016 has been launched in the Black Sea, with the main objectives of enhancing:

There are 13 participant Nations from:  Bulgaria, Georgia, Greece, Lithuania, Italy, Moldova, Poland, Romania, Sweden, Ukraine, Turkey, the United Kingdom, and the United States in this Training Exercise to maximize their joint capabilities.  The United States also provides most required Military assets to execute this Training.

U.S Army with European Armed-Forces……the centuries of the most closest Partnerships, and the shared Values from General Marquis de La Fayette to the recent time.

View the article and the video

With more than 5000 Soldiers and Airmen from 10  NATO Allied Armed-Forces,  Swift Response 16 was one of the greatest Multi-National Military Crisis Response Training for Airborne Forces. The Training was executed in Poland and Germany  from May 27- June 26, with a successful outcomes.

The Armed -Forces participating in this Training-Exercise were from: Belgium, France, Germany, Great Britain, Italy, the Netherlands, Poland, Portugal, Spain and the United States.

The Overall objective in the Exercise was formulated to:

Gen. Breedlove assumed the position as the Commander of European Command and Supreme Allied Commander in  2013, during a high challenging time in NATO history after the cold war era.

Among many high caliber achievements of Gen Breedlove are his success in:

As a result NATO is far more stronger, today,  than ever……

The U.S Air force from Europe participated in one of NATO’s recent Training Exercise ‘Real Thaw’ hosted by Portuguese Armed-Forces. The Training aimed to upgrade the participants Nations’ skills in the non-Combat Operations while increasing the Allied Interoperability and effectiveness in both Offensive and Defensive Air Operations.

The Real Thaw was carried out from February 22- March 3, with the participation of Air Forces  from Belgium, Denmark, France, Norway, Portugal, Spain, the Netherlands, the United States, and other NATO Forces.

“It’s an incredible opportunity to be here in Portugal,”  “We’re excited to be here working side by side with our NATO Allies honing our Joint Air Interoperability as well as Tactical Skills.”  stated Lt. Col. Rob Fowler,from U.S  493rd Fighter Squadron Operations Supervisor.

“Real Thaw gives us the opportunity to train and learn from other Countries experiences,”  “Here we are able to effectively learn how to use each other’s assets and how to play together if there is ever a time we come together in a Deployed Theater.” expressed Officer Buzzer from 301st Portuguese Air Base F-16M Pilot. 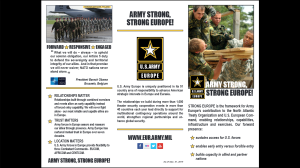 US and Europe Stronger together

German-American Friendship Day Celebration at the US Army Europe Garrison

September and October are German-American months across the United States every year.

It begins from General von Steuben Day in September to the October 6th, the official proclaimed German-American Day by the White House to highlight the Historical Heritage, Cultural intertwine and bonds between the two countries.

Since 2004, October 1st is designated by the US Army Europe, as the German-American Day__ and is celebrated widely in US Army Garrisons in Germany.

This year on Friday October 1, the Day was  also recognized by an official ceremony followed by a reception in Frankfurt.

U.S Army Aviation with the Army Multinational Battle Group-East (Army Reserve and National Guard Soldiers from California,Connecticut and Florida) and Swiss aviators entered in the Rescue Effort Operation in the fire disaster area in Kosovo on 29th of August to stop the fire and save lives.

More than 47,000 gallons of water were dropped to the affected area by helicopters. The Operation was part of U.S Army Europe which supports the European Armed-Forces in all category of emergencies including war, conflicts and Natural disaster.

From 20-31 July 2015 the U.S Army in Europe conducted a joint Exercise with its European Counterparts.

Rapid Trident, was part of U.S Army Europe that had its Training intensity on Peacekeeping and Stability Operations.

There were over 1800 members of Armed-Forces from 18 EU States as well as Canada.

The U.S Armed-Forces with the European in Exercise Combined Endeavor 2014

In continuation of Training and Military update, the US Army Multinational Training and Exercise in Europe organized ‘the Exercise Combined Resolve III’ from October–November 2014 in Grafenwoehr and Hohenfels, Germany.

The Exercise is set to upgrade the NATO Allied Armed-Forces with the various aspects of Combats, Joint Operations, Rotational Forces, and introducing the updated version of Infantry Fighting Vehicles and other Military equipment with the use of live and Simulated Maneuvers. 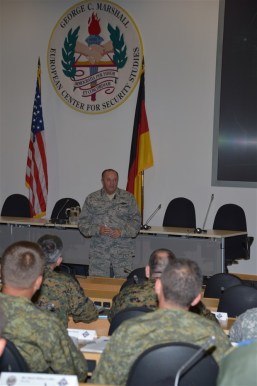 “I strongly welcome the Spanish commitment of PATRIOT missiles and troops to the NATO deployment in southern Turkey,”

“The Alliance’s southern border is located in a difficult neighbourhood and considerable instability remains in Syria and across the region. Spain’s clear demonstration of Alliance solidarity is critically important to the people of Turkey and for all members of the Alliance,” concluded General Breedlove.

The Patriot missile Defence System has been placed by NATO in Turkey since 2012, in response to request made by Turkish government.

The mission was launched by the United States, Deutschland and Netherlands who are providing the main Military assets for this NATO-led Mission.

Following the decision made by the Ministry of Defense of Spain in mid-September 2014, Spain has also announced to join the Allied in Patriot Missile Defence mission in Turkey.

The members of Deutscher Bundestag during the briefing by US Army Colonel John Digiambattista, Commander of the 1st Brigade Combat Team and the 1st Cavalry Division in Hohefels/Germany. 15, May, 2014 ©US Army Europe/7th Army Joint Multinational Training Command Public Affairs.

On May 16th the US Ambassador John B. Emerson with several members of the German Parliament visited the US-European Military Training field to see the Exercise Combined Resolve II.

The visit was also a view for US and German Politicians to observe the excellent Cultural and Military relations between the two countries. The Exercise Combined Resolve II, scheduled from May-June 2014, is the U.S. Army Europe Multinational Exercise at the Hohenfels and Grafenwoehr Training field.

There are 13 US-European Allied Nations with over 4000 Military personnel that take part in it. The Armed-Forces participating in the Exercise are from: Albania, Austria, Belgium, Bulgaria, Croatia, France, Georgia, Hungary, Lithuania, Romania, Serbia, Slovenia and the U.S.

©The US European Command

Legal Conditions
All the materials on this site  (articles, news, photos, videos, media) are from various Governmental Agencies and are strictly Copy-righted. Redistribution, reproduction, copying, or linking the content of this organization, in any kind, are prohibited by Law.