The Kingdom of Denmark and its World Affairs

Denmark has opened a new innovation centre in Tel Aviv in October that will strengthen Danish innovation, research, growth, and employment. Announced by the Denmark’s MFA 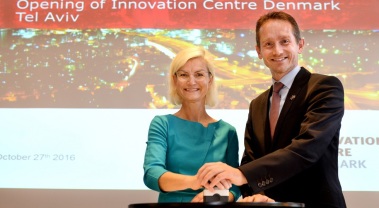 On the eve of this occasion Minister Kristian Jensen for Foreign Affairs of Denmark highlighted:

“Israel is among the OECD countries that invest the most in research and development. And it is internationally recognised for its active and vibrant start-up environment. There are many opportunities for Danish companies and research and educational institutions to enter into partnerships, exchange knowledge and create innovation with some of the very best research and innovation environments in Israel.”  October 27, 2016 © Danish MFA

“Israel offers strong research and innovation environments particularly within the fields of health and green energy. The Danish innovation centre will improve the opportunities for Danish companies and researchers to collaborate even closer with these attractive environments for the benefit of Danish research, innovation and growth,” Spoke earlier Danish Minister for Higher Education and Science Ulla Tørnæs. October 27, 2016 © Danish MFA

The 10 Great Reasons to Invest in Denmark

Denmark the Land of European Innovation and Technology presents the best reasons for Investment in its Territory.

The Great 10 Good Reasons to Invest in Denmark

Invest in Denmark and Copenhagen Capacity are helping IBM expand its activities with a new innovation centre in Copenhagen. Within two years, 250 IT professionals will be employed at the new centre. The first talents will join already by the beginning of 2017.

Denmark’s unique position as an innovation lab with access to highly skilled IT talents with a solid business acumen has been the main reason for IBM’s choice of Denmark as the location for its new innovation centre. The centre is expected to bring IBM closer to its Danish clients, making it easier for them to collaborate on creating new innovative digital solutions.  Announce the MFA of Denmark October 5, 2016 © MFA of Denmark

Additional:  Denmark will bolster its Military Support to Afghanistan

Denmark –  with Norway, Sweden, Luxembourg, the United Kingdom and the Netherlands is part of an exclusive group of countries. Announced by the MFA of Denmark

The countries are the only ones to live up to the UN’s goal of giving at least 0.7 percent of the GNI in development aid.  These are the findings of a preliminary report for 2015 published today by the OECD, an international economic cooperation organisation.

“We can be proud to belong with this group of countries that live up to the UN’s goal. We were part of it last year and this year, and we will be part of it again next year,” expressed  Minister for Foreign Affairs Kristian Jensen.”  April 13, 2016 © The  MFA of Denmark

Denmark will bolster its Military Support to Afghanistan

From the time when the  International Security Assistance Force ‘ISAF’ was established in 2001, and later transformed to non-Combat ‘Resolute Support’ in January 2015, the Royal Danish Armed Forces has been playing a potent role in both Operations.  On the Financial scale  Denmark has been also providing substantial amount of Humanitarian, Economic and Educational Aid to Afghanistan since 2001.

The recent announcement by the Government affirms with the further measures to bolster its Military support to Afghanistan– that to be applied on both:

“We have decided to continue our financial support to the Afghan Security Forces at the current level throughout 2020 and to increase our contribution to NATO’s training mission in Afghanistan. It is necessary that we stand together with the international society and continue to support Afghanistan, so that the country can get back on its feet and fight the terrorists. It is a difficult and fragile situation, but we must help the Afghans in their stabilisation efforts, so that they can see a future in their own country. This is also in Denmark’s best interests,”  states Minister for Foreign Affairs, Kristian Jensen. May 12, 2016 © Ministry for Foreign Affairs of Denmark

“The efforts of our Danish soldiers in Afghanistan have helped to make a difference in the country. We are now building upon this by strengthening our military contribution. The security situation in Afghanistan remains under pressure, and it is therefore crucial that the international society continues to offer its support.” Affirmed the Minister of Defence Peter Christensen. May 12, 2016 © Ministry for Foreign Affairs of Denmark  Continue to read

The U.S Defense Secretary Carter met with  Defense Minister Peter Christensen of Denmark in Stuttgart, Germany on May 4th to discuss a range of Security-Defence issues and the upcoming NATO summit in July.

Defense Secretary Carter thanked Denmark for intensifying its Military presence in Counter-ISIL combat and Denmark’s Military Leadership in continuing its support to NATO and the regional Security.  (Source: May 4, 2016 U.S Department of Defense)

Denmark the Front runner in the fight against Da’esh

In the occasion of this approval Minister Kristian Jensen stated:

“The fight against Da’esh is now entering a new phase. The global coalition has succeeded in denying Da’esh safe-havens and forcing the organisation back on the ground as well as disrupting its financial access and economic sustainment. But Da’esh still poses a major threat to the civilian population in the region – and to Europe through terrorist attacks and foreign terrorist fighters.  Therefore, we must increase the Military pressure on them.” Continue to read

Described by the MFA, Denmark currently contributes to the fight against Da’esh  in three fields:

“I am pleased that a large majority has voted for the extended Danish Military engagement against the terrorist organisation Da’esh. With the broader mandate we will be able to fight Da’esh across the border to Syria leaving them nowhere to hide. It is important that we continue the fight and push even harder as they are currently being pushed back.

The Danish Military capabilities are in high demand and it is without doubt that our Soldiers are highly professional and well trained. I have the highest respect for their enormous dedication both previously and currently and I am confident that they will deliver on a high level during the coming deployments as well.”  affirmed Defence Minister Peter Christensen. April 19, 2016 © MFA Denmark

The Ministry of Foreign Affairs of Denmark has allocated new aid to United Nation agency UNMAS to help Mine Action Response.

“This contribution reflects our strong and consistent support for the United Nations in its delivery and coordination of mine action. Mine action is a vital component of humanitarian response in conflict and post-conflict settings for protection of civilians and safe access for other humanitarian actors. We call upon others to follow our lead and increase support to mine action to  protect the civilians who are bearing the brunt of protracted armed conflict in many countries.” stated Kristian Jensen, Minister for Foreign Affairs. March 7, 2016 ©MFA Denmark/ UNMAS

See more news on our other sites on Denmark

Legal Conditions
All the materials on  Deutschland in der Welt.org  (articles, news, photos,videos and media) are from various Governmental Agencies and are strictly Copy-righted. Redistribution, reproduction, copying, or linking the content of this organization, in any kind, are prohibited by Law.