An Exclusive Interview with the U.S Army Europe

In the Exclusive Interview Series, this time we have the special occasion of presenting our interview with the United States Army Europe. The interview has been conducted with the Team of  Public Affairs of the U.S Army Europe HQ in Germany.

Q:  The United States and Europe are immensely interconnected, not only by Historical Heritage, Values and Ideals for centuries, but also by Political Landscape, Security and Defense.

Our history is absolutely the foundation of what connects the United States and Europe. During the Warsaw Summit in July President Barack Obama said, “In this challenging moment, I want to take this opportunity to state clearly what will never change – and that is the unwavering commitment of the United States to the security and defense of Europe, to our transatlantic relationship, to our commitment to our common defense.”

This is also the case for the U.S. Army’s role with our European Allies and partners. Although the security environment has dramatically evolved over the last 25 years, it is vital for us to continue to work and train with our Allies and partners. Multinational exercises like Swift Response, Anakonda, Inherent Resolve, Saber Guardian and other training opportunities benefit Army Europe Soldiers as well as our National Guard and Reserve components. We know firsthand that training with our Allies, partners, and NATO better prepares us all for future operational requirements.

Such operations and exercises provide our U.S. Army Soldiers with necessary training and valuable skills needed to operate in this theater. They also facilitate building relations with our Allies and partners, which is just as important. Everything we do should demonstrate to our European Allies and partners that we understand our responsibility and commitment to offer assurance.

Q:  ‘Strong Europe’ could you please illustrate this crucial aspiration of the U.S Armed-Forces in Europe and how the U.S Army present, project and implement this Concept?

By looking at the stories on our website, the content on our social media channels and following the coverage of the exercises, you will see that “Strong Europe” is not a catch phrase, it is a commitment.

This commitment is the corner stone of the framework that makes up everything U.S. Army Europe contributes on behalf of the Army, to EUCOM, AFRICOM, CENTCOM, and NATO. Europe is a complex and dynamic security environment that presents evolving challenges. With the contributions and capabilities provided by our Allies, partners and regionally allocated forces this strategic effect can be reached. 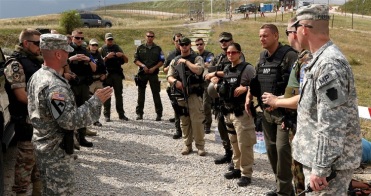 U.S. Army Europe operates with five pillars to support our priorities. They are: Empowering Junior Leaders; Army Reserve and National Guard support; Allies and Partners; Regionally Allocated Forces; and Dynamic Presence. All of these components make up “Strong Europe”.

This environment offers one of the best leadership laboratories in the U.S. military. Junior officers and noncommissioned officers (NCO) are executing the full range of multinational/joint operations, while also developing best practices for our future force.

U.S. Army Europe is a smaller force than in previous years, but we leverage every opportunity to develop relationships and capabilities. One of the ways we enhance our capabilities is with the support of the U.S. Army Reserve and National Guard. The integration of the National Guard and Reserve into the Army Europe team is a major component of making 30,000 Soldiers look and feel like 300,000.

The National Guard resources Army Europe with units that supplement the active force. Concurrently, the Army Reserve provides both individuals and units. With the integration of these vital assets, we achieve greater interoperability and capability across Europe. Leveraging Overseas Deployment Training rotations, the Army Reserve and Guard Soldiers boost our land force capability across the 21 states that participate in the State Partnership Program in 22 different countries.

Working with our allies and partners is the normal way to operate in Europe. We contribute to strengthening our alliance as part of NATO’s collective defense.

The 7th Army Training Command is where U.S. forces along with our Allies and partners train and practice their interoperability and interdependence.

By leveraging the European Rotational Force and multiple rotational aligned units, we continue to lead the Army in integration of Regionally Allocated Forces.

Our dynamic presence enables U.S. Army Europe to better connect with our allies, government leaders and civilians across Europe, as well as provides transparency of our actions and operations for the American populace and key stakeholders. Through dynamic presence, we demonstrate and tell the “Strong Europe” story while living the eight tenets of Army Operations: initiative, simultaneity, depth, adaptability, endurance, lethality, mobility and innovation.

Q:  Rapid Trident 16 was concluded on July 8 in Ukraine.

Q:  Exercise Anakonda 2016 was one of the biggest U.S Army Multinational Exercise with more than 31,000 participants from 24 European Nations.

Exercise Anakonda 16 was one of the premier training events for 2016 for U.S. Army Europe.  It demonstrated that the United States, ally and partner nations can effectively unite together under a unified command while training on a contemporary scenario. Large-scale exercises such as AN16 send a clear message that the United States is capable of enabling and executing a full range of military missions in concert with our European allies and partners to secure U.S. national interests and to support a Europe that is whole, free, prosperous, and at peace.

Q:  Another NATO-led Multinational Exercise which took place this year was the ‘NATO Cold Response-16’ in Norway.

Exercise Cold Response was a Norwegian-led exercise that rehearsed high-intensity operations in challenging winter conditions. The exercise involved more than 3,000 U.S. service members; approximately 6,500 members of the Norwegian Armed Forces; and nearly 4,000 troops from 11 allied and partner nations including Great Britain, Germany, the Netherlands, Sweden, Poland, Denmark, Canada, Belgium, France, Latvia, Spain and close to 300 NATO personnel. This was the first time; the U.S. Army participated in this Norwegian exercise. The National Guard did not participate in this exercise. However, there were observers from various state bureaus.

This was another successful opportunity for U.S. Army Europe to participate while learning from and supporting our Allies and partners.

Lt. Gen. Ben Hodges, commander of U.S. Army Europe said during the exercise, “In addition to learning to quickly and effectively operate in a frigid environment, this exercise is a great opportunity to practice and conduct training essential for security with partner nations.”

It is very beneficial and necessary for U.S. Army Europe Soldiers to diversify and enhance their Tactics, Techniques and Procedures for different areas of operations. As with other exercises, the increased understanding and cooperative efforts between our countries and militaries will enable us to work together effectively and to address any and all security challenges that may arise in the region or other parts of the world.

The Interview is subject to Copyright Law.  © The United States Army Europe/ Deutschland in der Welt.org.  All Rights reserved.