The RT Hon Baroness Anelay has announced in Parliament the update of the UK’s National Action Plan on Business and Human Rights.

“I am pleased that we have today published our updated National Action Plan on Business and Human Rights. The Plan rightly acknowledges the duty of Government but also sets out our expectation that UK businesses will act responsibly and in accordance with the UN Guiding Principles, wherever they operate.

Human Rights are at the heart of both our Diplomats’ and Ministers’ work and this updated National Action Plan clearly restates our conviction that the promotion of business and respect for human rights go hand in hand.”  stated the Rt Hon Baroness Anelay.  May 13, 2106 © UK Foreign Office

The UK’s Leadership in tackling corruption in the globe

Hosted by Prime Minister David Cameron in London, the Anti-Corruption Summit took place on May 12. The Summit was to expose, to shed a light on how to find away for many countries out of it.   Announced by the UK government:

“This is the first summit of its kind, bringing together world leaders, business and civil society to agree a package of practical steps to:

Prime Minister David Cameron announces the creation of the first ever global forum to step up international efforts on asset recovery.

The United Kingdom’s  support for Gibraltar

Foreign Secretary Philip Hammond visited Gibraltar for high level talks on the United Kingdom’s support for the Territory and the upcoming EU referendum.

“The UK’s support for Gibraltar and the Gibraltarian people is firm and unconditional. I look forward to holding strategic talks with the Chief Minister and the Deputy Chief Minister on the territory’s thriving economy, defence and security issues, and the upcoming EU referendum.”  highlighted  Foreign Secretary Philip Hammond. May 11, 2106 © UK Foreign & Commonwealth Office     Continue to read

The United Kingdom, through its Political and Diplomatic stance, has been the strongest Advocator, the consistent Promoter and the uncompromising Defender of Human Rights, Democracy and Freedom in the World.  A luminary record that affirms, the Ideas and Values of a Land, that can induce……and reignite movements…..and soar….. like an imaginary melody…..et…….au-delà de l’idéalisme.

On the importance of promoting Human Rights with the UK Foreign Policy, Foreign Secretary The Rt Hon Philip Hammond elaborated:

“The promotion of Human Rights is a core part of the everyday work of the Foreign Office and is the responsibility of British diplomats around the world. This year we are doubling the funding available for Human Rights projects to £10 million, through the Magna Carta Fund – a true measure of the importance we attach to this agenda.” April 21, 2016 ©UK Foreign Office

The announcement by the Foreign Office states:

The Fund is launched on 18 January 2016 by FCO Minister Baroness Anelay which aims to further British interests overseas by tackling the root causes of Human Rights violations, strengthening institutions and governance, promoting and protecting Human Rights, and supporting Democracy and the Rule of Law.

Additional References on the UK Foreign and Commonwealth Office to defend Human Rights and promote Democracy around the World:

The UK’s Leadership in the fight against ISIL

On March 31, during an official visit to Lebanon Foreign Secretary Philip Hammond allocated from the United Kingdom £20 million aid to the Lebanese Armed Forces. 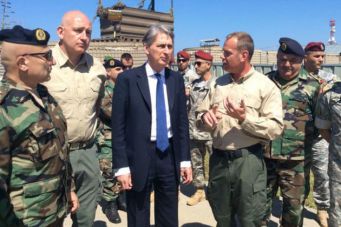 Announced by the Foreign office the fund is to help Lebanon to protect itself against terrorism, including the threat from Daesh.

Since years ago, the United Kingdom has been the largest Humanitarian aid donors to Refugee crisis in Syria, only second  to the United States.

Just recently in February 2016 Prime Minister David Cameron, announced that UK to invest and aid an extra £1.2 billion supporting Syria and the region

The amount will help the people in Syria and the region for Education, creating Jobs and Humanitarian Protection.

Also the UK has been the largest Humanitarian aid donors to the United Nations Central Emergency Response Fund (CERF), Ranking the First.

Supporting Syrian and the Region, London 2016

Foreign Secretary Philip Hammond and  the Secretary of State John Kerry during their meeting in London February 4, 2016 © UK Foreign Office

“Our British democratic values have developed over time with human rights at their core. We are reminded of this fact this year as we mark the 800th anniversary of the Magna Carta, sealed at Runnymede in my constituency.

Human Rights Day – chosen by the UN General Assembly to mark the Universal Declaration of Human Rights, is a day when Britain, a key promoter of such rights and values, can hold its head high. This Government was elected on a manifesto commitment to protect Human Rights. We are doing that in three ways.

…..we make most progress on Human Rights around the world when our approach appeals to others’ enlightened self-interest and is sensitive to their culture and history. In short, we have to persuade countries and governments that respecting human rights will be beneficial to them.

Human Rights expertise is an important part of the training our staff receive. Teams working in countries where we have particular concerns, and their colleagues in London, see Human Rights as an integral part of what we are trying to achieve with that country. This year the Foreign Office is supporting more than 75 Human Rights projects in more than 40 countries and we are continuing to pursue a pioneering approach to preventing sexual violence in conflict.

We were leaders on Human Rights in 1215, as the Magna Carta was sealed, and we remain leaders now in 2015.

As we promote and protect those standards across the world, we are approaching Human Rights diplomacy in our own, British way, to ensure we get the right results.”    10 December 2015©UK Foreign Office

Legal Conditions
All the materials on  Deutschland in der Welt.org  (articles, news, photos,videos and media) are from various Governmental Agencies and are strictly Copy-righted. Redistribution, reproduction, copying, or linking the content of this organization, in any kind, are prohibited by Law.