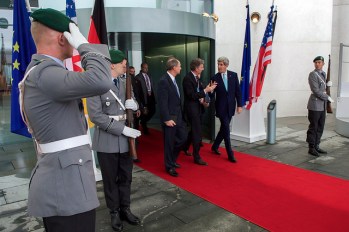 U.S. Secretary of State John Kerry and U.S. Ambassador to Germany John Emerson after their meeting with Bundeskanzlerin Dr.Angela Merkel 22.October 2014 ©US Department of State

Secretary of State John Kerry had a visit in Berlin to meet with Bundeskanzlerin Dr.Angela Merkel and Außenminister Dr. Steinmeier for discussing range of issues including closer partnerships between the two countries.

The Highlight of the statements of  Bundeskanzlerin Dr.Angela Merkel and Secretary of State John Kerry

“There are a number of International issues that will be on the agenda of our talks today – indeed, international issues that are on the agenda for all of us in this year 2014.  There are many of those tasks, many of those issues, many very demanding issues, and all of these can only be mastered by us if we act together, if we act in close partnership and coordination with our partners and friends in the United States of America.”  Bundeskanzlerin Dr.Angela Merkel

“President Obama, our administration, the American people have great respect for your leadership, and we appreciate enormously what Germany is doing on every single issue of critical importance today. I’m also mindful that I’m coming here today where I visited the old wall and met with some of your young kids who were asking questions about the future, none of whom had been born during that period of time. They were all post-Cold War.
And so even as we celebrate the fall of the wall and all that it symbolizes, it was very clear to me today, as it is to America, that the story of Germany is not the past – it’s the future, and what you are doing to define that future, leading Germany on so many issues to be a global leader. And I want to thank you, because on Ebola, you are contributing people, expertise, medivac capacity now, money, and Germany is one of the leaders in the effort to deal with this challenge.” Secretary of State John Kerry

©US Department of State