The new Chief of Staff for U.S. Army Europe is from die Bundeswehr

The new Chief of Staff for US Army Europe, for the first time, is from die Bundeswehr

From August 2014, Brigadegeneral Markus Laubenthal, from the German Army, has become the new Chief of Staff for the US Army Europe. A historic step which projects closer relations between die Bundeswehr and the United States Armed-Forces. 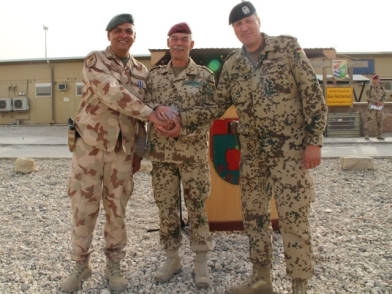 “I view my new duties as chief of staff with interest and respect. As the commander of Panzerbrigade 12 (12th Armored Brigade) ‘Oberpfalz’, I have always valued the joint exercises with our partnership unit, the 2nd Cavalry Regiment in Vilseck. I am therefore even more pleased to continue this close cooperation in a new and unique way in Wiesbaden. I am sure that I can use the experience I gained in the German Army supporting the training of ready Army Forces, in my new position with USAREUR.”  expressed Brigadegeneral Laubenthal.

With this new integration of the US Army in Europe with die Bundeswehr Lt. Gen. Donald Campbell the Commanding General of the US Army Europe highlighted:
“This is a major step forward in USAREUR’s commitment to operating in a multinational environment with our German allies. U.S. and German senior Military Leaders have been serving together in NATO’s International Security Assistance Force in Afghanistan for years. Sustaining the shared capability from this experience will benefit both U.S. and German Armies. As you know, actions speak louder than words, and this innovation carries a very strong message regarding our seriousness about a multinational team.”  “I look forward to working with Brigadier General Laubenthal and seeing the tremendous impact his presence will have on the team,”  concluded the US Commander in Europe.