‘Strong Guard 2016’ has concluded its Training

Exercise Strong Guard 2016  was a unique US-European Military Training Exercise, executed during a three day time frame, to boost the close Partnership and the Interoperability of U.S National Guard, Military Police Battalion, Marines, with the Land-Forces and National Guards of Lithuania and Latvia. The Training was finalized successfully with a Military ceremony on August 14, 2016.

Reaffirmed by the U.S Army, “Strong Guard 2016 demonstrated the continued U.S. commitment to the security of the NATO Allies in the light of the increased tension in Eastern Europe.” August 2016 © U.S Army Europe 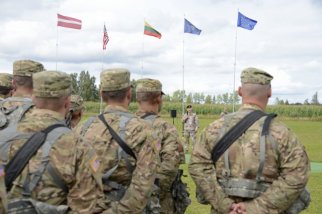 There were Soldiers, in variety of uniforms…… presenting their Brigades, Battalions, and Units– stood in salute in the closing ceremony.  In a normal day or an ordinary condition, after three days and nights of  heavy  Training, which had challenged the toughness of Minds and the strength of Physique beyond all limits–  one would had resigned before the finishing line and to exhaustion. But far from that– these were the Soldiers that have surpassed every extremes.  Standing firm, …..their eyes were radiating with the the heights of pride……, and strength was yet visibly depicted in every steps of their movements….. as they marched towards the Garrison at their Commander’s behest.