From  2008 die Bundeswehr has been engaged in an EU-led Counter-Piracy Operation ‘die Operation Atalanta’ in the coast of Somalia and Gulf of Aden and has been the leading Forces of this mission.

According to International Maritime Bureau (IMB)and the ICC Commercial Crime Services: “Globally, 174 ships were boarded by pirates in 2012, while 28 were hijacked and 28 were fired upon”          The report continues: “In Somalia the  most commonly attacked are: container ships, bulk carriers and tankers loaded with oil, chemicals and other products.  The fishing vessels and other smaller boats are also at risk.”

The Success of the Atalanta:

With the significant success of this Operation, over 150 ships have been  able to cross the coast and deliver supplies from the World Food Programme to the Humanitarian crisis area in Somalia.  And the number of Piracy attempts has been reduced dramatically as the result of the EU Forces led by die Bundeswehr in the region.

With the  the EU-led Operation of Atalanta  the number of attempted piracy and people taken hostage on board in 2011 fell from 802 to 585.  And statistic report shows that the Piracy in this region, in 2012 fell to the lowest point in comparison to 2009.

Operation Atalanta is Mandated in the following tasks: 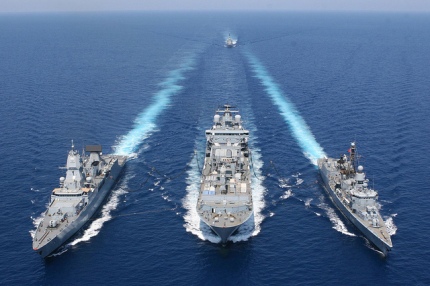 Operation and joining training in the Gulf of Aden.  (photo courtesy of Bundeswehr/Schönbrodt. November 2010)

Additionally Bundeswehr is also involved in two Operational tasks in the region:

1-  In the European Training Mission in Somalia.  Published by the Federal Government of Deutschland by April 2013, die Bundeswehr had already trained over 3000 Somalian national army troops.

The (EUCAP NESTOR) is a European regional mission with the aim at increasing the Maritime Capacity of the five countries in the Horn of Africa and the Western Indian Ocean.

Its objectives places the focus on:

In May 2013  with the high request from the EU-led Operational Command the Bundestag agreed to extend the mission of the German Armed Forces in  the coast of Somalia for further twelve months, until May 2014.

Most Military experts in U.S and around the World predict that with the extension of Bundeswehr’s mandate  in the region ‘ the  Operation  Atalanta’ is  set for another round of well-strategic Einsätze …..only to reach the absolute  Endsiege.