Since the start of the internal crisis  in Mali in 2012,  the European Union has been engaged to de-escalate the intra-conflicts in that region.  However it was in January 2013 that with the  request from the government of Mali that  the  next crucial step was implemented by French Intervention as a part of Combat Operation to fight with the violent extremists and to liberate the northern parts of Mali.

Additionally,  in February 2013 the European Union authorized the European Military Training Mission in that region.  Nevertheless the continuation of conflict required a larger Military deployment for protecting the local people and the region from the ongoing violence and the spread of extremists.

With the approval of new mandate from the German Parliament in February 2013 die Bundeswehr was  authorized to step in the region with two Operational Tasks:

With 180 Offiziere and Military experts, die Bundeswehr is supporting the European Union Training Mission which includes:

In the African-led International Support Mission in Mali (AFISMA)

At the present time, there are 150 Bundeswehr Soldiers in AFISMA operation:

Simultaneously Germany has been engaged in Humanitarian Relief Operation in the region as the main donor  to:

Added to these organizations, Deutschland has already allocated  13.65 million euros to Mali for helping the local people on the humanitarian basis since the end of 2011.

Additionally in the Donors Conference in January 2013, Germany contributed 20. million US dollars to the African Support Mission in Mali (AFISMA).  Along with that, the Foreign Office has openly announced that added to all the financial aid die Bundeswehr’s  Operation in supporting AFISMA  is estimated 3. million US dollars per month for Germany.

On the Operational front, although the deployment of die Bundeswehr in Mali was  approved by the German Parliament in February 2013 for a period of one year (February 2013-February 2014).  Aber yet die Bundeswehr’s presence was highly anticipated by the UN, EU, from long earlier and had been exceptionally demanded by the heads of many African States when the crisis in the region became out of control in 2012. 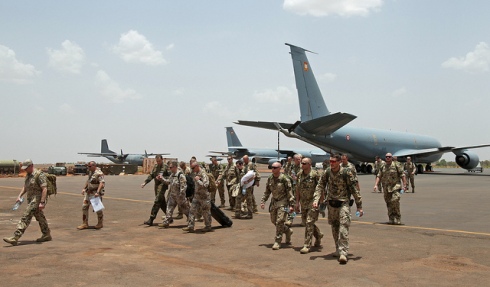 As in Operation in Kosovo, Afghanistan and in many other conflicts zones,  die Bundeswehr has  been not only a unique components of UN Peacekeeping Forces, the EU Military deployments, the NATO Operations, and ISAF Missions,  but prominently the main crucial acting partner in solving most International conflicts and  the various regional crisis.  A  role highly imperative that needs to be recognized more,  acknowledge in the International setting……. und yet to be noch weiter acceded and celebrated with honour and the highest  esteem at home……….in Deutschland.