On June 3, the application of the Missile RBS 15 MK 3, a subsystem for Corvette K 130, which can also be applied in Operation against Land targets was approved. 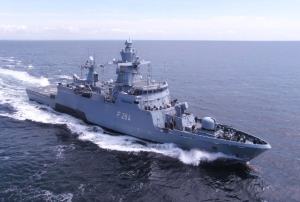 With this new measure in place, German Navy  for the first time has an  unlimited–  fully quipped weaponized system at its disposal that to empower it  with a long range use of weapons from Sea.

Described by the Bundeswehr:  “With the commission of the new Corvette Class K 130, the Navy brings into operation a new type of Missile. The RBS-15  is Anti-Ship Missile that can be launched from various platforms with the highest advanced robotic system enabling it– to operate from Air, Land and Sea.”

The German Navy’s Corvettes have already the leading position in the version of MK 3 Missile. With the much advanced technology….. and Radar systems,  added with the 200 Kilometers extended range……, that to ensure to do not miss any targets…..  this new type yet promises to overwhelm …..surpasses all the pervious ones.