The Federal Republic of Germany jointed the North Atlantic Treaty Organization (NATO) on 6 May 1955. And since it has been a vital partner to the member States and an irreplaceable  key player in most NATO regional and global Operations.

Among many NATO Operations here are some notable ones that die Bundeswehr has participated:

The Secretary General also expressed his gratitude to die Bundeswehr for its outstanding contributions to NATO and the security of Europe.

Die Geschichte der NATO 1949-2013
For Peace and global Security, indeed NATO has achieved more than that could ever be described or applauded by historians.
As a vital member State since 1955, Germany along with its US and other European partners has contributed tremendously, to keep this Transatlantic Defence Apparatus as dynamic, enduring– and strong. 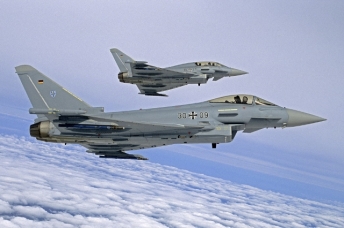 Under NATO Mandate Operation in the Baltic region die Bundeswehr is resuming its Air-policing Operation from September to December 2014.
The Operation will be carried out with several Europefighers from die Luftwaffe to patrol Estonian, Latvian and Lithuanian Airspace.

The Baltic Airspace has been patrolled by the Air Forces of the NATO member States. And thus far there are 14 NATO members participating in this Operation.
As a crucial partner in the NATO Air-Defense, die Bundeshwer has been in the Baltic region Air-Policing operation since 2004.

“Germany has played a crucial role in the international response to Russia’s actions. When Europe and the world needed you, you were there.
It is vital for Europe and the world that Germany remains strong, to provide not only Political and Economical pressure, but Military presence as well.
So that no country can be in any doubt: If the rules are broken, if our freedom, our people and our borders are threatened, we will respond.”

“I am very grateful for Germany’s leading role in Afghanistan and in Kosovo. Your troops have done a remarkable job in the north of the country, as I saw for myself when I visited Mazar-e-Sharif. Across the country, security has created the conditions for a better Afghanistan and given the Afghan people the opportunity to develop their country and to decide their own future.”

The secretary General continued: “At the end of the year, we will end our combat mission and turn a new page in Afghanistan. Germany has again taken a leading role in offering to be framework Nation in the new non-combat mission we are planning after 2014. Taking the lead in training, advising and assisting Afghan forces. Building on the many gains we have made.
Germany also plays a key role in keeping our collective defence strong. Both to our south, with a Patriot battery in Turkey, and to the east in the Baltic region. Germany’s commitment to international peace and security is clear.

“Of course, Germany’s defence priorities are for Germany to decide.  But I would urge you, as I urge every Ally to give increased priority to your defence. As European economies recover from the economic crisis, so too should our investment in defence. Today, our world is more dangerous and more unstable than at any time since the end of the Cold War. By facing up to this reality, by investing in our own defence, and by standing together as one through the NATO Alliance, we will ensure our peace and security for another 65 years and beyond. ”  concluded NATO Secretary General ©NATO

“We all realise that transatlantic burden-sharing is about more than just defence budgets.  European Allies, including Germany, continue to make substantial contributions to NATO-led operations, including in Afghanistan and Kosovo.  Several also are making significant contributions to our developing NATO missile defence system.  And there is a lot of good European work going on in NATO “Smart Defence” and EU pooling-and-sharing projects.

But I just don’t think last month’s European Council on defence showed enough urgency, nor enough understanding of the critical need for Europe to be able back up its soft power with hard power if it wants to play a meaningful international role.  And I also believe it did not show enough understanding of the current political climate in Washington which, although it’s not anti-European, was certainly more pro-European in the past, and more favourably inclined toward international engagement than it is today, after a decade of war.

So in the coming year, European nations are really going to have to step up.  European governments must realise that, even though their populations may feel safe, that perceived lack of a threat is self-delusional.  They must make the case to their populations that defence still matters.  They must demonstrate that they are prepared to hold the line on defence cuts, and hopefully increase spending as their economies improve.  And they must show they are serious about working together, about developing long-term procurement and investment programmes, and about ending the fragmentation of their defence industries.”

Bundespräsident Joachim Gauck met with NATO Secretary General Anders Rasmussen. The meeting covers range of issues including Germany’s role in NATO for fostering Peace and Security in various NATO missions.
The Secretary General of NATO praised die Bundeswehr’s  contributions into NATO,  particularly as the leading Force in Afghanistan  ISAF and in Kosovo in KFOR. 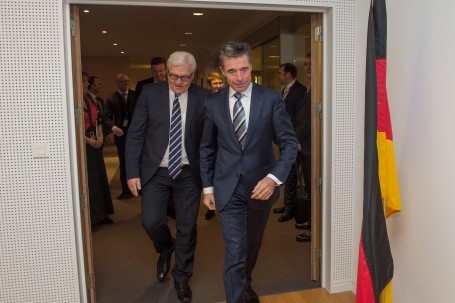 The Briefing by the  Secretary General on the role and the Leadership of  die Bundeswehr in  NATO.

Legal Conditions
All the materials on  Deutschland in der Welt.org  (articles, news, photos, videos, links) are from various Governmental Agencies and are strictly copy-righted. Redistribution, reproduction, copying, or linking the content of this organization, in any kind, are prohibited by Law.