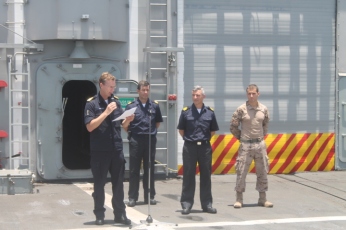 Force Commander Commodore Luyckx after being welcomed by Commanding Officer, Commander Antonio Posada on board of Santa Maria delivered a speech to the crew. September 5, 2016 © EU NAVFOR

In the same frame of time, the flagship HNLMS Tromp and its Dutch Naval force conducted a training for the port authorities in Puntland, Somalia. The training took place with the presence and support of the Representatives from the UN Office on Drugs and Crime ‘UNODC‘.