On August 6,  in the Naval ceremony  Royal Netherlands Navy assumed the Force Command of the Operation Atalanta from German Navy. 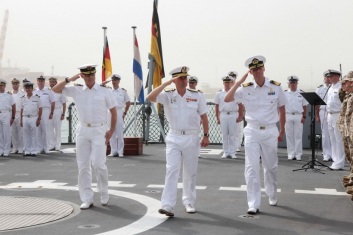 The Royal Dutch Air Defence and Command Frigate HNLMS Tromp  equipped with NH90 Chopper, will be for the next approximately four months the Flagship of Operation Atalanta,  the HQ of Force Commander Commodore René Luyckx, and his crew added with 10 other European State’s personnel and several EU partners in the Counter-Piracy Operation.

“The EU Naval Force, in co-operation with counter-piracy partners, has been highly effective in reducing pirate attacks. At the height of Somali piracy in January 2011, 736 hostages and 32 Ships were being held by Pirates.  As of May 2015, no Merchant Vessels are being held in captivity.”  Elaborated the new Force Commander  Commodore René Luyckx of Royal Netherlands Navy.  Djibouti,  August 6 2016 © EU NAVFOR

This is the second time that Commodore René Luyckx  leads the Operation.  In May 2015 he was the Commanding Officer of HNLMS Johan de Witt  in Operation Atalanta. 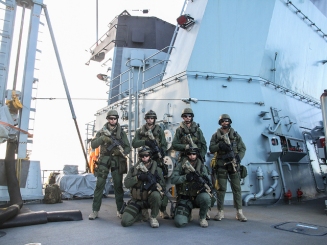 His current Flagship HNLMS Tromp of  Royal Netherlands Navy,  does also conjure up…..  a well-known tale of a Ship, and the electrifying hostage Rescuing Operation…….. by the Dutch Marines …. in the chapters of the European Union’s Naval Operation Atalanta.

It was in the early hours of April 5  2010,  in the abruptly hijacking situation the MV Taipan (German owned container Ship) and its crew were taken hostage by a group of Armed Pirates.   The unclassified correspondence of  European Naval Force indicates that as the negotiation attempts with the Pirates did not bring a positive result,  the HNLMS Tromp launched an offensive course, by  authorizing its Dutch Marines to a swift Disrupt….., Boarding, …. and Rescue Operation….. which  ended in …..seizing  the Vessel ……and rescuing the hostages unharmed. The Armed-Pirates were rounded up and captured…….later transported to the Netherlands for the trial.

By Editor in Chief  (Copy-Righted Material)