The aftermath of UK Referendum on EU 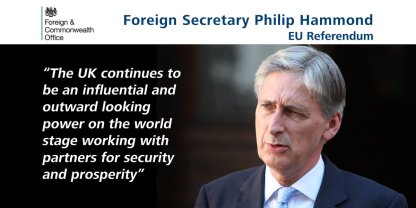 Statement by President Obama on the outcome of the UK referendum:

Statement by Foreign Minister Dr. Steinmeier on the UK referendum:

“There are no two ways about it. This is a bitter day for Europe,”   “We never stopped hoping that the British people would reach a different decision and vote in favour of the European Union.”    “ This represents the departure not only of a member State but also of a wealth of National History, Tradition and Experience that has helped shape the European Union throughout the past decades.”

Minister Steinmeier also noted that the decision to leave the European Union had been “close, but clear”. “First and foremost, we have to respect that,”  June 24, 2016 © German Foreign Office

Statement by Prime Minister Rutte of the Netherlands on the outcome of UK referendum:

“The result of the UK referendum is disappointing. We must now look for stable solutions, calmly, and one step at a time. It is important to ensure stability. We are in the process of reforming the European Union. This result is an incentive to carry on with that reform and work hard for more prosperity, more jobs and more security. Particularly for a country like the Netherlands, cooperation is of vital importance.”  June 24,  2016 © MFA of the Netherlands

Statement by NATO Secretary General Jens Stoltenberg  on the outcome of the referendum in UK:

“The British people have decided to leave the European Union. As it defines the next chapter in its relationship with the EU, I know that the United Kingdom’s position in NATO will remain unchanged. The UK will remain a strong and committed NATO Ally, and will continue to play its leading role in our Alliance”   June 24, 2016 © NATO

Dear Readers, from our side we don’t have any words to add except ‘We are devastated by this out come as we see it, how in a broader context it would affect unfortunately– the entire Europe not only the United Kingdom. (the Editor)