The United Kingdom’s Leadership in NATO

On April 14 NATO Secretary General Jens Stoltenberg travelled to London and met with Prime Minister David Cameron. The meeting incorporated discussion on range of issues  that are challenging Europe, the subject of Global Security and the Nuclear Proliferation. The two leaders also discussed on the upcoming NATO Summit in July 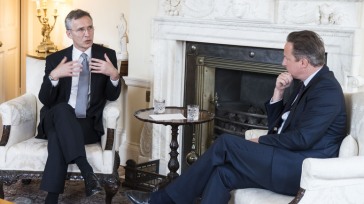 Secretary General Jens Stoltenberg highlighted that the World in a more unpredictable chart, NATO counts on the United Kingdom’s Leadership in addressing  these challenges and combating with the threats.  He also thanked United Kingdom for its crucial leadership in NATO’s Collective Defense and the UK’s leading contribution to NATO which is the second to the U.S.

“NATO and the European Union are two organisations which are vital and which are working closely together in many different areas, and I would welcome even closer cooperation,” stated Secretary General  April 14, 2016 © NATO

In early March this year, Prime Minister Cameron announced an additional contribution to NATO’s recent Mission –by deployment of the Royal Naval Ship Mounts Bay in support of NATO Operation to the migrant crisis in the Aegean Sea