German-American Friendship Day Celebration at the US Army Europe Garrison 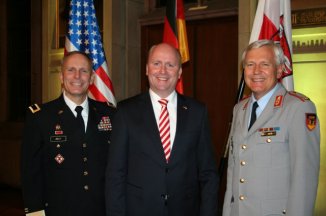 September and October are German-American months across the United States every year. It begins from General von Steuben Day in September to the October 6th, the official proclaimed German-American Day by the White House to highlight the Historical Heritage, Cultural intertwine and bonds between the two countries.

Since 2004, October 1st is designated by the US Army Europe, as the German-American Day__ and is celebrated widely in US Army Garrisons in Germany.

This year on Friday October 1, the Day was  also recognized by an official ceremony followed by a reception in Frankfurt.