In April, 6th 2014 the current European Union’s Counter Piracy Operational  Command has been handed over from France to German Command. 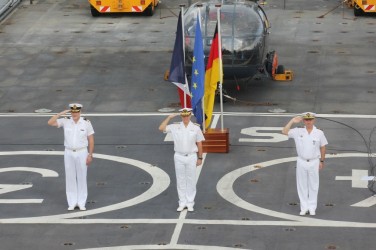 Die Bundeswher has been engaged in die anti-piraterie-mission ‘ Operation Atalanta’ since 2008 with over 1400 Military personnel under the UN resolution and in the the frame work of EU NAVFOR.

“Since 2008 there have been no successful attacks against World Food Programme (WFP) vessels. We have seen the pictures from the media of Somali people and refugees suffering from famine. EU NAVFOR contributes significantly to reduce this humanitarian crisis by protecting WFP vessels. And furthermore EU Naval Force continues to protect vulnerable shipping against pirate attacks. Under my command the Task Force will continue to support the EU’s comprehensive approach by working with EUCAP Nestor and other EU initiatives in the region.”