Seemingly long centuries ago Empire, Rome still possesses the Cultural and Political influences that appeal not only to intellectuality yet to emotion as well.  A country that stands forever…….. at the  center of history for Western Civilisation.

On 2nd March, in his first official visit President Sergio Mattarella travlled to Berlin to meet with Bundespräsident Joachim Gauck and Bundeskanzlerin Angela Merkel. The occasion was to highlight a closer partnership between Italy and Germany at all fronts.

In his speech, Bundespräsident Joachim Gauck, highlighted the special  friendship between Italy and Germany, while emphasizing the importance of unity in Europe.

Under the leadership of Ambassador Reinhard Schäfers, the German Embassy in Italy initiated a high level Security Policy discussion in Rom at the Ambassador’s residence. 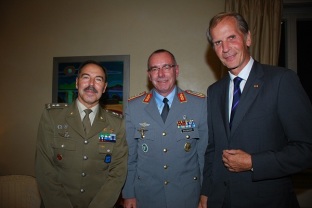 Generalmajor Salvatore Farina and Generalleutnant Volker Halbauer, both Commanders of KFOR gave presentation about their first hand experiences in KOSOVO, which is recorded as one of the major European Military deployments, and its Operational report.
During this high level conference the subject of European Armed-Forces in KOSOVO, and how successful it was in terms of Security and the Cooperation among European, was also highlighted and explored.

The outcome of this formal discussion projects that the Security dialogue between Deutschland and Italy is one of the best practiced in the Multinational framework, in the Military Exercises and Training Tasks as well as in the Operational field. 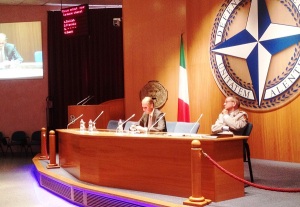 At the invitation of the Commander Major General Janusz Bojarski, Ambassador Herr Reinhard Schäfer visited the NATO Defense College in Rome and delivered a  lecture on “The European Common Security and Defence Policy (CSDP)”

There were over 100 Military students of NDC  from NATO Member-States attending the lecture.  The Ambassador Herr Schäfer also spoke on Political- Security Committee, how the Common Security and Defence Policy was developed and the prospect of it.

The event rounded out with the discussion on  the “International organizations” and the current  European challenges which lead to the further development of the Common Foreign and Security Policy.

Discover and learn the Roman Empire and its central Power of the Western Civilization.

Legal Conditions
All the materials on Deutschland in der Welt.org  (articles, news, photos and Media) are copy-righted. Redistribution, reproduction, copying, or linking the content of this organization, in any kind, are strictly prohibited by Law.
All rights reserved 2013-2016.