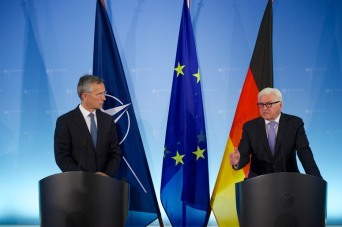 During the Press conference, NATO Secretary General Jens Stoltenberg  praised Germany for its commitment to NATO and to global security.

“Germany, which is at the heart of Europe and at the heart of the NATO Alliance is a key Ally and appreciate so much our close cooperation. You are making significant contributions to different NATO operations.  From Afghanistan to Kosovo to the Aegean Sea. You are playing a role in enhancing the defence of our Allies in the East, Germany being a lead nation for one of the battalions we are going to deploy in the eastern part of the Alliance.” Berlin September 2, 2016  © NATO Public Office

Secretary General also highlighted the very essential effort and the success of  Dr. Frank-Walter Steinmeier as the Chair of OSCE in relation with Russia and Ukraine by saying:

“And I, in particular, appreciate your strong personal commitment to the work and the efforts to find a peacefully negotiated solution to the conflict in Ukraine. This is important for Ukraine but it is of course also important for the whole of Europe and for our common security.” Berlin September 2, 2016  © NATO Public Office