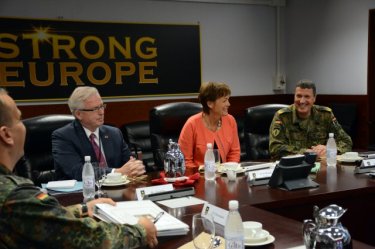 Ministerin Lucia Puttrich, the Hessian Ministerin for European and Federal Affairs visited the US Army Centre Europe and met with Brigadier General Markus Laubenthal the Chief of Staff U.S Army Europe, Lt. Gen. Ben Hodges the Commander of Army Europe, and his staff.

The visit of Ministerin Lucia was to emphasize the importance of great relations between  U.S. Army Europe’s and German Armed-Forces, the Hessen Government and the local Community in the region.

“It is an honorable signal to us that the US Army, after the disappearance of the ‘Iron Curtain,’ relocated its headquarters for Europe back to the Hessian state capital of Wiesbaden. The outstanding cooperation between the US Army headquarters, the German Forces Land Command Hessen and the Hessian state government is, considering the current threat posed by IS terror militias, very important for our civil-military cooperation and of high significance for the safety of our citizens,” concluded her visit Madame Ministerin Puttrich.