“Wherever I have had discussions here, I was impressed with the respect, a very high respect and warmth that in US people spoke about our Armed-Forces, die Bundeswehr. Expressed Defence Minister Dr.Ursula von der Leyen about her visit in United States. 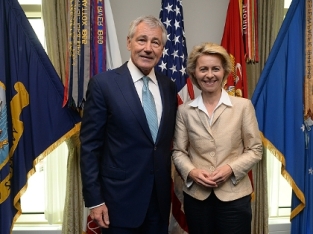 German Defence Minister Dr. Ursula von der Leyen met with the US Defense Secretary Chuck Hagel at the Pentagon, to strengthen the two countries partnerships at the Military level.

Their discussion covers mainly on:

“NATO is the strongest Military alliance in the world and the most influential political one.”  Highlighted the Defence Minister Dr. von der Leyen during her visit in Washington DC.

“ The United States and Germany count on one another to be credible, capable partners, as Leaders in both the Transatlantic alliance and the global community. The crises in Iraq, Syria and Ukraine remind us that our Leadership roles require investment in Ready, Modern, Agile Militaries.  Both Leaders recognized the importance of investing in capabilities that will strengthen our collective security.” The Real Admiral added.