In the Memory of das Unternehmen Hannibal Januar-Mai 1945, the Kriegsmarine Soldaten, and the German civilians who lost their lives during that Evacuating Operation. 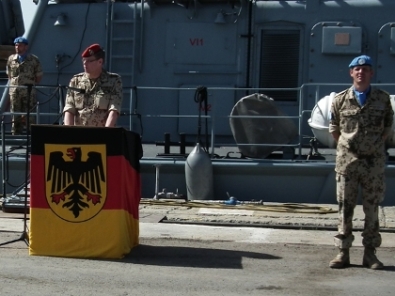 In June 2013 the German Parliament extended for one more year the Bundeswehr deployment mission in the United Nations Interim Force in Lebanon (UNIFIL) until July 2014.  The estimated additional cost for Germany in this mission for the next twelve months will be about  26.4 million euros, stated die Bundesregierung.

In the recent years the security of the Lebanon has been further threatened by  the rise of conflicts in the region particularly in Syrian, which shares close borders with Lebanon.  As the most requested Military Forces by the UN Peacekeeping Operations and the Territorial governments,  die Bundeswehr  has been present in the region since 2006.

Außerdem, Germany’s commitment to the Security of the Region has not been limited  to Military deployments and training.  Simultaneously Germany is taking every steps to foster Political Stability;  providing essential Socioeconomic and Financial aids as well as Educational-Scientific upgrade  to Lebanon.

As ever the German Armed-Forces …….  has been greatly  welcome  in the Middle-Eastern Region and in the Mediterranean Sea.  This has been proclaimed by both officials and the people of the Region.

Yet this is not the first time, nor the only Territory, who sees and believes that die Bundeswehr must step in. It was just a few months ago, in early 2013,  that in West Africa and Mali the same conclusion was announced.