The Prußian Military Commander in the U.S Continental Army

The Prußian Military Commander in the U.S Continental Army 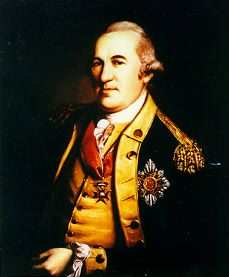 (Image courtesy of  U.S Department of Army, Office of the Inspector General)

As of yet, in Americans’ perceptions Germans are either great Military Commanders or Rocket Scientists. A concept which has its origin coherently aligned to reality.

From the time that the German Cartographer Martin Waldseemüller (1470-1520) brought the New World: the United States of America on the word map, until the 21 century, each pages of our history projects the very essential role that the German immigrants have played in United States formation, development, and victories.

It also shows the Americans fascination by, and their praise for, Deutschland.

One of the greatest Military commanders who was an outstanding figure in helping the United States Army during the revolutionary war was: “Friedrich Wilhelm August Heinrich Ferdinand von Steuben (1730-1794).

A Prußian Military Commander who came to US and served as a Major General of the Continental Army.

Although it was in 1777 that in a meeting with Benjamin Franklin, the American Foreign Commissioners in France,  General von Steuben received the official letter of acknowledgement to join the US Continental Army, the road became open to him in much earlier in 1763 when he became acquainted with Louis de Saint Germain of France.1

Upon General von Steuben’s arrival to U.S the Continental Congress found him highly impressive Military Officer that they recommended him immediately to General George Washington.

He entered the Continental Army in 1778 and remained in it until 1784.

(Image courtesy of  U.S Department of Army, Office of the Inspector General)

Among his various duties as a high level Officer, he also was in command of training the US Army.

His book “Regulations for the Order and Discipline of Troops of the United States” which became well known in entire US Army at that time, is known  ‘The Army’s Blue Book’.

Until now it is considered one of greatest Military training book among U.S Military high level experts.

Below is one of the links from the U.S army in acknowledgment of this fact.

In the U.S history, General von Steuben is a celebrated German Commander whose remarkable Military strategy in battles and his extraordinary skills in training the U.S Continental Army paved the path for a great victory of the United States in the Independence war.

General Von Steuben Day is celebrated with Parades, special events and celebrations every year in September across the United States.

In his remembrance, in la Fayette square Washington DC, stands majestically the Monument of a German Commander who is known, ewiglich the American Hero:  General Friedrich Wilhelm von Steuben

LEGAL and Conditions
All rights reserved on this Organization’s website 2013-2016.

Any reproduction, copying, or adding the link of this organization without written permission is prohibited by Law.